Easy There, Caffaholics... Put the Cup Down

For some people, especially in an office setting, those one to two cups of coffee a day can be a ritual. It might even be a habit. Caffeine is a part of some people's lives. Co-workers with stashes of “K-Cups” for the machine in the break room… that guy in the next cube with the stash of high-test caffeinated pop.

In a culture in which we see ads on TV for hyper-caffeinated drinks – "five-hour" this, "game fuel" that -- how much is too much?

Caffeine is arguably the most massively-consumed drug in our entire history. No drug is as imposing, or as openly received. Though this certainly makes caffeine accessible, it does not make it free of side effects. Even proper consumption warrants a few more mild issues.

Organically, caffeine blocks a chemical known as adenosine from telling the brain that it needs or wants to relax. Aside from that, caffeine has two other side effects that impede you body from reaching its peak performance: 1) It dehydrates you, drying up water your body needs to process food. 2) It also hinders your body’s ability to absorb magnesium, which supports a healthy gastrointestinal tract, and helps your body metabolize carbs.

Caffeine affects people differently. Some may be able to consume 200 to 300 milligrams a day and face few of the side effects. This is not necessarily a recommended amount, but it is an amount which correlates with wellness, and lessened caffeine dependency.

Unfortunately, many people consume closer to 500 to 600 milligrams a day. The major issues with this intake amount are muscle tremors, restlessness, insomnia, and consistent nervousness including a faster steady heartbeat. Many chiropractic offices find these issues arising more and more in patients as the caffeine standard daily intake increases in our culture.

The most sinister side effect to caffeine consumption is cardiac arrhythmia, where the heart undergoes sporadic palpitations. This is essentially a caffeine overdose. Though it is not quite common considering the amount of people addicted to caffeine, it is still a major issue and intensely lessens your overall wellness. 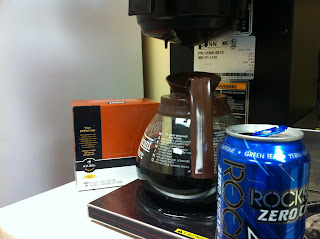 Caffeine is sneaky, and available in much more than coffee – a list we found on Prevention’s website showed you can find it in Excedrin pain reliever (130 mg in a two-tablet dose), Ben and Jerry’s No Fat Fudge Frozen Yogurt (85 mg in one cup) and even a Hershey bar (12 mg). Now if you keep in mind that a chiropractor might recommend keeping your caffeine intake down to 100-200 milligrams a day (which equates to about 1 cup of coffee)… are you surprised?

Keep in mind that caffeine can affect different people in different ways, and building a tolerance to it may lessen the severity some of the side effects. However, if you consider the dehydration and nutritional consequences we’ve discussed here, it can’t hurt to consider looking at your caffeine intake more closely.

Maybe try it out for a couple weeks. See if you feel a difference. And feel free to let us know in the comments.